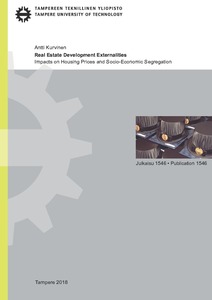 This doctoral contribution is a quantitative study based on positivist philosophy. Relying on the theory of externalities, the objective is to extend understanding on impacts of externalities deriving from real estate development. To contribute to the existing research-based knowledge, four relevant research questions were selected to be addressed. Those include the following themes: (i) price impact from proportion of rental housing, (ii) development impact from senior houses, (iii) development impact from multi-story apartment buildings, and (iv) relationship between development of building stock and socio-economic status in the neighborhood. To address the targeted knowledge, comprehensive quantitative data was analyzed combining advanced econometric methods and GIS techniques. Based on the findings, the following presents main contributions and recommendations:

(i) Only minor depreciation was estimated to be attributable to higher proportion of rental housing. First, this should alleviate prejudices against rental housing. Second, the results contribute to policy debate of whether home-ownership should be subsidized. Based on the findings from the externalities point of view, heavy subsidization of homeownership may not be justified and this should be brought into discussion.

(iii) Development of new residential multi-story apartment buildings was estimated to have no statistically significant impact on the prices of nearby flats from 1960s and 1970s. Thus, no evidence of any harmful effect in such cases was found. While these findings should alleviate concerns of the impacts of land use change, they do not, however, provide a clear incentive to initiate infill projects.

(iv) From the spatial perspective, socio-economic segregation seems to be a relatively permanent phenomenon. The analyzed indicators suggest that spatial segregation has increased in major Finnish cities in the 21st century but, however, the pace has remained relatively low. Real estate development may provide tools to revitalize neighborhoods and prevent adverse effects of segregation at neighborhood level. However, the analysis at grid cell level does not provide adequate evidence for long-term decision-making. Therefore, more research on different scales, such as neighborhood level, is needed to properly understand the bounds of possibilities.