Industry life-cycle theory in the cultural domain: Dynamics of the games industry 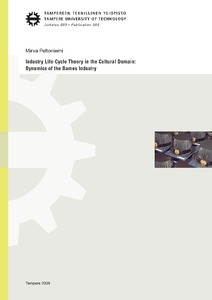 
Peltoniemi, M.
Tampere University of Technology
This publication is copyrighted. You may download, display and print it for Your own personal use. Commercial use is prohibited.

Industry life-cycle theory is interested in changes in key industry variables, including entry and exit rates, firm numbers, price, performance and concentration, and in innovative activity as the industry ages. To date, industry life-cycle studies have concentrated on traditional manufacturing industries that produce utilitarian goods. The present study investigates the dynamics of the games industry which is a prime example of a non-manufacturing and non-utilitarian industry. As prior research on the games industry is scarce, the cultural industries literature is reviewed to shed light on the conformities and deviations that can be expected to be found between the propositions of the industry life-cycle theory and the empirical analysis on the games industry. The specificities of cultural industries are discussed in terms of economic characteristics, management challenges and industry dynamics.
The empirical study comprises two analytical steps. The first one investigates the evolution of the games industry with standard industry life-cycle tools. In the second one a qualitative systems dynamics model on the micromechanisms of the game development sector is built to explain the observations made in the first step.
The key finding of the study is that the dynamics of the games industry differ from the propositions of the industry life-cycle theory in two respects. Firstly, innovative activity has not levelled off in either hardware or software. Secondly, game development has remained an unconcentrated industry. The innovative activity is explained by the constant need for novelty common to all cultural industries and it manifests in the key role that the production of original ideas has in game development firms. The low level of concentration is explained by lesser economies of scale caused by increasing management challenges and the increasing risk of bankruptcy with increase in firm size.
The study contributes (1) by applying the industry life-cycle theory to the cultural domain, (2) by combining the phenomena listed in the cultural industries literature and analysing their effect on industry dynamics, (3) by examining the evolution of the games industry in both hardware and software sectors and (4) by highlighting the micromechanisms that produce industry dynamics. The study also has implications for policy-making and management practice. These relate to different forms of public funding, education, outsourcing and the key role of original IP.