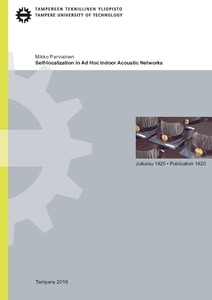 The increasing use of mobile technology in everyday life has aroused interest into developing new ways of utilizing the data collected by devices such as mobile phones and wearable devices. Acoustic sensors can be used to localize sound sources if the positions of spatially separate sensors are known or can be determined. However, the process of determining the 3D coordinates by manual measurements is tedious especially with increasing number of sensors. Therefore, the localization process has to be automated. Satellite based positioning is imprecise for many applications and requires line-of-sight to the sky. This thesis studies localization methods for wireless acoustic sensor networks and the process is called self-localization.

This thesis focuses on self-localization from sound, and therefore the term acoustic is used. Furthermore, the development of the methods aims at utilizing ad hoc sensor networks, which means that the sensors are not necessarily installed in the premises like meeting rooms and other purpose-built spaces, which often have dedicated audio hardware for spatial audio applications. Instead of relying on such spaces and equipment, mobile devices are used, which are combined to form sensor networks.

For instance, a few mobile phones laid on a table can be used to create a sensor network built for an event and it is inherently dismantled once the event is over, which explains the use of the term ad hoc. Once positions of the devices are estimated, the network can be used for spatial applications such as sound source localization and audio enhancement via spatial ﬁltering. The main purpose of this thesis is to present the methods for self-localization of such an ad hoc acoustic sensor network. Using off-the-shelf ad hoc devices to establish sensor networks enables implementation of many spatial algorithms basically in any environment.

Several acoustic self-localization methods have been introduced over the years. However, they often rely on specialized hardware and calibration signals. This thesis presents methods that are passive and utilize environmental sounds such as speech from which, by using time delay estimation, the spatial information of the sensor network can be determined. Many previous self-localization methods assume that audio captured by the sensors is synchronized. This assumption cannot be made in an ad hoc sensor network, since the different sensors are unaware of each other without speciﬁc signaling that is not available without special arrangement.

The methods developed in this thesis are evaluated with simulations and real data recordings. Scenarios in which the targets of positioning are stationary and in motion are studied. The real world recordings are made in closed spaces such as meeting rooms. The targets are approximately 1 – 5 meters apart. The positioning accuracy is approximately ﬁve centimeters in a stationary scenario, and ten centimeters in a moving-target scenario on average. The most important result of this thesis is presenting the ﬁrst self-localization method that uses environmental sounds and off-the-shelf unsynchronized devices, and allows the targets of self-localization to move.