Modeling and control of a pneumatic muscle actuator 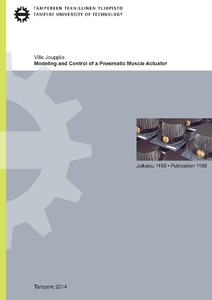 This thesis presents the theoretical and experimental study of pneumatic servo position control systems based on pneumatic muscle actuators (PMAs). Pneumatic muscle is a novel type of actuator which has been developed to address the control and compliance issues of conventional cylindrical actuators. Compared to industrial pneumatic cylinders, muscle actuators have many ideal properties for robotic applications providing an interesting alternative for many advanced applications. However, the disadvantage is that muscle actuators are highly nonlinear making accurate control a real challenge.

Traditionally, servo-pneumatic systems use relatively expensive servo or proportional valve for controlling the mass flow rate of the actuator. This has inspired the research of using on/off valves instead of servo valves providing a low-cost option for servo-pneumatic systems. A pulse width modulation (PWM) technique, where the mass flow is provided in discrete packets of air, enables the use of similar control approaches as with servo valves. Although, the on/off valve based servo-pneumatics has shown its potential, it still lacks of analytical methods for control design and system analysis. In addition, the literature still lacks of studies where the performance characteristics of on/off valve controlled pneumatic systems are clearly compared with servo valve approaches.

The derived system models (linear and nonlinear), were used for both control design and utilized also in simulation based system analysis. Due to highly nonlinear characteristics and uncertainties of the system, a sliding mode control (SMC) was chosen for a control law. SMC strategy has been proven to be an efficient and robust control strategy for highly nonlinear pneumatic actuator applications. Different variations of sliding mode control, SMC with linear model (SMCL) and nonlinear model (SMCNL) as well as SMC with integral sliding surface (SMCI) were compared with a traditional proportional plus velocity plus acceleration control with feed-forward (PVA+FF) compensation. Also, the effects of PWM frequency on the system performance were studied.

Different valve configurations, single 3/2, dual 2/2, and servo valve, for controlling a single muscle actuator system were studied. System models for each case were formulated in a manner to have a direct comparison of the configuration and enabling the use of same sliding mode control design. The analysis of performance included the sinusoidal tracking precision and robustness to parameter variations and external disturbances. In a similar manner, a comparison of muscle actuators in an opposing pair configuration controlled by four 2/2 valves and servo valve was executed.

Finally, a comparison of a position servo realized with pneumatic muscle actuators to the one realized with traditional cylinder was presented. In these cases, servo valve with SMC and SMCI were used to control the systems. The analysis of performance included steady-state error in point-to-point positioning, the RMSE of sinusoidal tracking precision, and robustness to parameter variations.