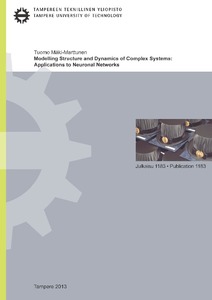 Complex systems theory is a mathematical framework for studying interconnected dynamical objects. Usually these objects themselves are by construction simple, and their temporal behavior in isolation is easily predictable, but the way they are interconnected into a network allows emergence of complex, non-obvious phenomena. The emergent phenomena and their stability are dependent on both the intrinsic dynamics of the objects, the types of interactions between the objects, and the connectivity patterns between the objects. This work focuses on the third aspect, i.e., the structure of the network, although the other two aspects are inherently present in the study as well. Tools from graph theory are applied to generate and analyze the network structure, and the effect of the structure on the network dynamics is analyzed by various methods. The objects of interest are biological and physical systems, and special attention is given to spiking neuronal networks, i.e., networks of nerve cells that communicate by transmitting and receiving action potentials.

In this thesis, methods for modelling spiking neuronal networks are introduced. Different point neuron models, including the integrate-and-fire model, are presented and applied to study the collective behaviour of the neurons. Special focus is placed on the emergence of network bursts, i.e., short periods of network-wide high-frequency firing. The occurrence of this behaviour is stable in certain regimes of connection strengths. This work shows that the network bursting is found to be more frequent in locally connected networks than in non-local networks, such as randomly connected networks. To gain a deeper insight, the aspects of structure that promote the bursting behaviour are analyzed by graph-theoretic means. The clustering coefficient and the maximal eigenvalue of the connectivity matrix are found the most important measures of structure in this matter, both expressing their relevance under different structural conditions. A range of different network structures are applied to confirm this result. A special class of connectivity is studied in more detail, namely, the connectivity patterns produced by simulations of growing and interconnecting neurons placed on a 2-dimensional array. Two simulators of growth are applied for this purpose.

In addition, a more abstract class of dynamical systems, the Boolean networks, are considered. These systems were originally introduced as a model for genetic regulatory networks, but have thereafter been extensively used for more general studies of complex systems. In this work, measures of information diversity and complexity are applied to several types of systems that obey Boolean dynamics. The random Boolean networks are shown to possess high temporal complexity prior to reaching an attractor. Similarly, high values of complexity are found at a transition stage of another dynamical system, the lattice gas automaton, which can be formulated using the Boolean network framework as well. The temporal maximization of the complexity near the transitions between different dynamical regimes could therefore be a more general phenomenon in complex networks. The applicability of the information-theoretic framework is also confirmed in a study of bursting neuronal networks, where different types of networks are shown to be separable by the intrinsic information distance distributions they produce.

The connectivities of the networks studied in this thesis are analyzed using graph-theoretic tools. The graph theory provides a mathematical framework for studying the structure of complex systems and how it affects the system dynamics. In the studies of the nervous system, detailed maps on the connections between neurons have been collected, although such data are yet scarce and laborious to obtain experimentally. This work shows which aspects of the structure are relevant for the dynamics of spontaneously bursting neuronal networks. Such information could be useful in directing the experiments to measure only the relevant aspects of the structure instead of assessing the whole connectome. In addition, the framework of generating the network structure by animating the growth of the neurons, as presented in this thesis, could serve in simulations of the nervous system as a reliable alternative to importing the experimentally obtained connectome.