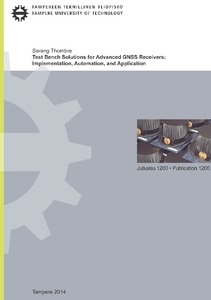 Considerable study has been devoted to the implementation of GNSS receivers for diverse applications, and to finding solutions to some of the non-idealities associated with such receivers. However, not much research is devoted to innovations in their performance evaluation, even though this is an integral step in the overall implementation process. This research work attempts to address this issue through three different perspectives: by focusing on innovation in the testing procedures and test-bench implementation, its automation and its application to advanced multi-frequency, multi-constellation GPS and Galileo receivers. Majority of this research was conducted within the GREAT, GRAMMAR, and FUGAT projects funded by EU FP6/FP7 and TEKES respectively, during which the author was responsible for designing test-scenarios and performing validations of the implemented receiver solution.

The first part of the research is devoted to the study and design of sources of test signals for an advanced GNSS receiver test-bench. An in-depth background literature study was conducted on software-based GNSS signal simulators to trace their evolution over the past two decades. Keeping their special features and limitations in view, recommendations have been made on the optimum architecture and essential features within such simulators for testing of advanced receivers. This resulted in the implementation of an experimental software-based simulator capable of producing GPS L1 and Galileo E1 signals at intermediate frequency. Another solution investigated was a GNSS Sampled Data Generator (SDG) based on wideband sampling. This included designing the entire radio front-end operating on the bandpass-sampling principle. The low noise amplifier designed as part of this SDG has been implemented on a printed circuit board.

Phase noise (PN) from the radio front-end’s local frequency generator (LFG) is a source of error that has hitherto not been included in any GNSS signal simulator. Furthermore, the characterization of the baseband tracking loops in presence of this phase noise has not yet been included in the typical receiver test scenarios. The second part of this research attempts to create mathematical models representing the LFG’s phase noise contribution, first for a free running oscillator and later for a complete phase-locked loop (PLL). The effect of such phase noise was studied on the baseband correlation performance of GPS and Galileo receivers. The results helped to demonstrate a direct relation between the PN and the baseband tracking performance, thus helping to define guidelines for radio front-end PLL circuit design in order to maintain a minimum baseband tracking performance within the GNSS receiver.

The final part of this research work focusses on describing the automated test-bench developed at Tampere University of Technology (TUT) for analyzing the overall performance of multi-frequency multi-constellation GNSS receivers. The proposed testbench includes a data capture tool to extract internal process information, and the overall controlling software, called automated performance evaluation tool, that is able to communicate between all modules for hands-free, one-button-click testing of GNSS receivers. Furthermore, these tools have been applied for the single frequency GPS L1 performance testing of the TUTGNSS receiver, with recommendations on how they can be adapted to testing of advanced multi-frequency, multi-constellation receivers.