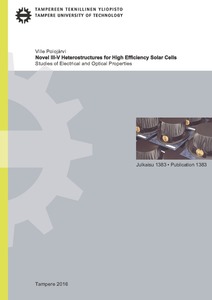 The thesis deals with the investigation of optical, electrical and structural properties of III-V semiconductor materials and nanostructures with applications in the development of next generation solar cells. In particular, the focus is on the study of quantum well (QW) and quantum dot (QD) nanostructures, and dilute nitride materials. Nanostructures can improve solar cell performance by, e.g., extending the absorption edge, providing an intermediate band, or suppressing reflection at the solar cell surface. Dilute nitrides, on the other hand, can provide better utilization of the solar spectrum, thus increasing the conversion efficiency of multijunction solar cells. The interplay between fabrication parameters as well as post growth treatments of the investigated structures, and their optical and electrical properties, are assessed by several characterization methods, including photoluminescence and capacitance spectroscopy. The results show that small changes in these parameters can have a significant influence on the defect populations and overall properties of the heterostructure, eventually defining the solar cell performance.

Starting from the outer layer of the solar cell device, the surface structure was found to play an important role in connection with thermal annealing. Short chemical treatments modifying the GaAs surface had a huge influence on optical and structural properties of the studied QWs upon annealing. Furthermore, ammonium sulfide treatment of the solar cell AlInP window layer was found to modify the surface structure and improve the solar cell performance. Optimization of the amount of deposited InAs and use of the so-called “flushing technique” was found to remove unwanted defects in QD layers. For the GaSb QD heterostructures, the influence of material fluxes during the growth, thermal annealing, and stacking of QD layers on optical and solar cell properties was studied. Dilute nitride QWs, acting as strain compensation and mediation layers for QD layers, were found to extend the absorption edge in the solar cell structure, and provide steps for charge carriers to thermally escape from the QD layer. Stacked strain free GaAs QD nanostructures, fabricated by refilling of self-assembled nanoholes, were found to emit photoluminescence related to several quantum dot states with narrow linewidths. The investigated GaAs QDs were also extremely temperature stable upon high temperature thermal annealing, indicating low defect densities. The formation of defects in bulk dilute nitride solar cells and their relation to process parameters on the one hand, and solar cell properties on the other hand, was also studied; optimal fabrication conditions were then devised. Incorporation of Sb was found to decrease the background doping density but at the same time broaden the deep level transient spectroscopy spectra. Furthermore, the As flux used during the fabrication of the dilute nitride solar cell was found to have a remarkable influence on solar cell performance.