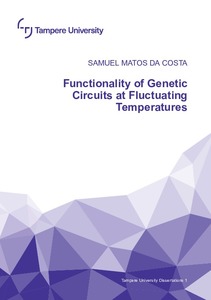 Temperature affects virtually all biophysical processes inside cells. Relevantly, it shifts over time, periodically and stochastically, sometimes in minutes. For these reasons, organisms have evolved complex mechanisms to cope with both temperature shifts as well as with temperature cycles.

Endothermic organisms have evolved cellular processes to generate and dissipate heat so as to regulate their body temperature. Failure in these processes can lead to death. Meanwhile, ectothermic organisms, such as Escherichia coli, do not have this ability. Instead, they evolved mechanisms to minimize potential harms. These are activated if temperature deviates from optimal ranges and are controlled by genes and genetic circuits. The robustness and sensitivity of genetic circuits to temperature shifts and what determines them remain largely uncharacterized.

In this thesis, we have studied the effects of temperature shifts on the dynamics of genes and small genetic circuits in Escherichia coli using in vivo single-cell, single-RNA detection techniques, microscopy and microfluidics devices, and image and signal analysis tools. Relevantly, two synthetic constructs were built specifically for these studies: i) an RNA sequence with multiple binding sequences for fluorescent probes was integrated into E. coli’s chromosome and, ii) the Elowitz-Leibler ‘repressilator’ circuit was inserted into a single-copy F-plasmid.

First, we focused on the effects of temperature shifts on the dynamics of a synthetic genetic clock, the above mentioned Elowitz-Leibler low-copy repressilator (LCR). By studying its fluorescence over time, we observed a loss of functionality (fraction of cells exhibiting oscillations) and robustness (fraction of expected oscillations that do occur) for higher-than-optimal temperatures. We hypothesized that this is due to a loss of functionality of the CI repressor, which is one of the proteins composing the structure of this circuit. To test this, we made use of a genetic switch (CICro, where CI is also a component of the circuit’s structure), which we subjected to the same temperature shifts. We found a behavioral change at the same temperature. Namely, as temperature is increased, at a given value, the kinetics of RNA production of the PRM promoter changes from sub-Poissonian to super-Poissonian, consistent with the emergence of tangible repression by the opposing protein, Cro. These behavioral changes in the two circuits, at the same temperature ranges, are best explained by the loss of functionality of CI, which is the only component present in both circuits.

Second, we investigated how coupling within a cell between the copies of the Elowitz-Leibler synthetic genetic clock affects its efficiency in time tracking. For that, we compared the functionality and robustness of the LCR and the newly engineered single-copy repressilator (SCR) to temperature shifts and to external perturbations by introducing Isopropyl β-D-1-thiogalactopyranoside (IPTG), an inducer of the PL-LacO promoter. By analyzing the mean and variability of the periods of oscillation of these two constructs we found that, surprisingly, contrary to when at optimal conditions, the SCR is more robust in regimes of low-temperatures and low-concentrations of IPTG.

Third, we focused on how intrinsic factors to single gene expression dynamics are affected by temperature shifts. Namely, we studied the effects of temperature fluctuations on the kinetics of transcription initiation of the promoters Plac-ara-1 and PtetA. For that, time intervals between consecutive transcription events were extracted using time-lapse, single-RNA microscopy measurements in live cells. To identify which rate-limiting steps of transcription initiation were responsible for the observed differences in varying temperature conditions, detailed stochastic models were fitted to the empirical data using statistical methods. The results suggest that different genes have different rate-limiting steps patterns, i.e. in number and duration of rate-limiting steps, which may allow them to adapt their sensitivity and RNA production kinetics (mean rate and variability) to environmental fluctuations.

Next, we studied the differences in the dynamics of RNA production of a gene when integrated into the chromosome and when integrated into a single-copy plasmid, for various temperature conditions. The results showed that when chromosome-integrated, long-lasting super-coiled states affect the temperature-dependence of the kinetics of transcription initiation. This was not observed in the plasmid-borne promoter, explaining why it is less noisy at low temperatures. We expect this to occur in other genes and to depend on the location in the chromosome. If true, and assuming that the location of genes in the chromosome is subject to natural selection, it implies that cells may make use of supercoiling as a means to regulate noise in gene expression.

Finally, we focused on the effects of temperature shifts on extrinsic factors to gene expression. In particular, we focused on the temperature-dependence of the cytoplasm viscosity. For that, the spatial distribution and mobility of large synthetic and natural protein aggregates in cells were assessed. Previous studies reported that their spatial distribution, at optimal temperatures, is heavily affected by the phenomenon of nucleoid exclusion. However, when cells were subject to critically low temperatures or osmotic stress, we found that both the natural and synthetic protein aggregates became more homogeneously distributed (consistent with weaker effects from nucleoid exclusion). We showed also that this is a result of increased cytoplasm viscosity, which reduced the effects of nucleoid exclusion. Interestingly, in agreement, we observed a reduction in the degree of asymmetries in aggregate numbers between sister cells across generations, which may affect the ability of rejuvenation of cell lineages.

Overall, the results above contribute to a better understanding of the complex consequences of temperature shifts on cellular processes. By affecting intrinsic and extrinsic factors, these shifts can alter significantly the dynamics of gene networks in bacteria. This knowledge is particularly important to understand the high degree of plasticity of natural genetic circuits, which will assist the engineering of robust synthetic genetic circuits.