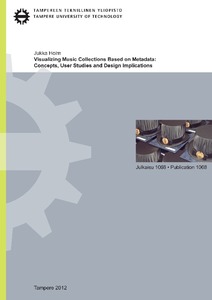 Modern digital music services and applications enable easy access to vast online and local music collections. To differentiate from their competitors, software developers should aim to design novel, interesting, entertaining, and easy-to-use user interfaces (UIs) and interaction methods for accessing the music collections. One potential approach is to replace or complement the textual lists with static, dynamic, adaptive, and/or interactive visualizations of selected musical attributes. A well-designed visualization has the potential to make interaction with a service or an application an entertaining and intuitive experience, and it can also improve the usability and efficiency of the system.
This doctoral thesis belongs to the intersection of the fields of human-computer interaction (HCI), music information retrieval (MIR), and information visualization (Infovis). HCI studies the design, implementation and evaluation of interactive computing systems; MIR focuses on the different strategies for helping users seek music or music-related information; and Infovis studies the use of visual representations of abstract data to amplify cognition.
The purpose of the thesis is to explore the feasibility of visualizing music collections based on three types of musical metadata: musical genre, tempo, and the release year of the music. More specifically, the research goal is to study which visual variables and structures are best suitable for representing the metadata, and how the visualizations can be used in the design of novel UIs for music player applications, including music recommendation systems. The research takes a user- centered and constructive design-science approach, and covers all the different aspects of interaction design: understanding the users, the prototype design, and the evaluation.
The performance of the different visualizations from the user perspective was studied in a series of online surveys with 51-104 (mostly Finnish) participants. In addition to tempo and release year, five different visualization methods (colors, icons, fonts, emoticons and avatars) for representing musical genres were investigated. Based on the results, promising ways to represent tempo include the number of objects, shapes with a varying number of corners, and y-axis location combined with some other visual variable or clear labeling. Promising ways to represent the release year include lightness and the perceived location on the z- or x-axis. In the case of genres, the most successful method was the avatars, which used elements from the other methods and required the most screen estate.
In the second part of the thesis, three interactive prototype applications (avatars, potentiometers and a virtual world) focusing on visualizing musical genres were designed and evaluated with 40-41 Finnish participants. While the concepts had great potential for complementing traditional text-based music applications, they were too simple and restricted to replace them in longer-term use. Especially the lack of textual search functionality was seen as a major shortcoming.
Based on the results of the thesis, it is possible to design recognizable, acceptable, entertaining, and easy-to-use (especially genre) visualizations with certain limitations. Important factors include, e.g., the used metadata vocabulary (e.g., set of musical genres) and visual variables/structures; preferred music discovery mode; available screen estate; and the target culture of the visualizations.