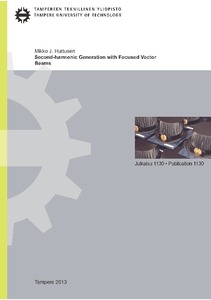 In this work, nonlinear light-matter interactions occurring at the focal volume of a tightly focused laser beam are studied and two new techniques for microscopy are developed. The techniques are based on the nonlinear phenomenon of second-harmonic generation, where two photons at the fundamental frequency combine into a single photon with doubled frequency. A mathematical treatment based on vector diffraction theory is applied for modelling the optical phenomena occurring at the focus. The vector treatment also predicts the occurrence of a new kind of multipolar light-matter interaction, which can lead to considerably large deviations from traditional scalar diffraction approaches. In order to demonstrate the predicted deviations and the capabilities of the developed imaging techniques, a nonlinear microscope is built and utilized.
The first actual microscopy technique is developed to study chiral materials on a microscopic scale. Chirality, or handedness, is a symmetry property which has importance in several branches of science as well as in nature itself. Chiral objects lack mirror symmetry, and can occur in two different configurations, known as enantiomers, which are mirror images of each other. The optical and chemical behaviour of the enantiomers can vary drastically from each other. We show that the developed imaging technique is capable of recognizing chiral objects, such as molecules or nanostructures, from their enantiomers.
The second imaging technique is developed to characterize the optical responses of three-dimensional nanostructures. These tiny man-made structures are utilized in the emerging fields of plasmonics and metamaterials. Recent advances in nanofabrication have made it possible to realize these nanostructures, which may in the future enable the control of light in unprecedented ways at the nanoscale. But these fabricated nanostructures often possess small defects, which may hinder their functionality. We show that by combining polarization-engineered focused vector beams with second- harmonic generation microscopy, we can provide an extremely sensitive tool to study the effects of nanoscale deformations on optical responses. The technique is used to characterize the optical responses of metallic nanocones, where nanoscale defects and deformations are seen to sometimes play a substantial role.