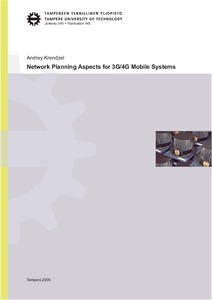 
Krendzel, A.
Tampere University of Technology


The first part of the research is mainly devoted to Core Network (CN) planning aspects for the third generation (3G) wireless systems. This is because of the fact that a large diversity of 3G services based on packet switching leads to dramatic changes in the characteristics and nature of the data traffic. In particular, there will be a considerable increase in the rate of transactions and in the total traffic intensity on Packet Switched Core Network (PS CN) domain elements of the 3G networks, especially, when the Internet Protocol (IP) Multimedia CN Subsystem (IM-subsystem) is involved. Besides, it is necessary to take into account the fact that the multiservice traffic in the 3G networks may have the self-similar nature due to the high variability of burstiness. It may lead to congestion situations and packet-drops in the 3G networks.


As a result of these facts, some 3G network planning problems arise and become more complex than ones relating to the current mobile systems. The following ones are considered in the first part of the thesis: the estimation problem of prospective 3G users, the prediction problem of 3G data traffic characteristics, the problem of performance evaluation of IM-subsystem elements.


It should be emphasized that the CN evolution is quite conservative and it is supposed that the enhanced CN of the 3G systems will be able to support the functionality of services of the fourth generation (4G) mobile systems. It is expected that the major changes in 4G systems will occur in the Radio Access Network (RAN). For this reason, the second part of the research deals with RAN planning aspects for the 4G wireless systems.


In particular, the 4G systems should be designed to offer higher bit rate channels (up to 100 Mb/s) and accommodate a significantly larger amount of traffic than the 3G systems. These requirements will make the 4G RAN different from current RANs and will innovate in its architecture. In the 4G systems, a new ring topology of a RAN physical links configuration may be applied in contrast to RANs of current wireless systems. In the second part of the study the RAN ring topology of physical links configuration is estimated from the viewpoint of cost and reliability parameters and the obtained parameters are compared with those of other topologies. As a result, some recommendations on using different topologies of physical links depending on the number of Base Stations (BSs) in the 4G RAN are developed. Besides, the problem of the minimum-cost configuration of physical links between BSs in the 4G RAN ring topology is considered.