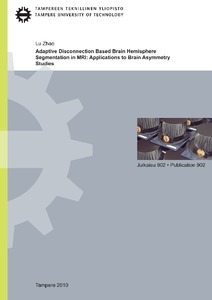 With the development of neuroinformatics, a number of large international databases of brain imaging data have been built by integrating images collected from multiple imaging centers or neuroscientific research institutes. This thesis aims to develop accurate, robust and automatic brain image analysis methods that can be applied to analyze the images contained in the large databases.

First a fully automatic algorithm, the Adaptive Disconnection method, was developed to segment the brain volume into the left and right cerebral hemispheres, the left and right cerebellar hemispheres and the brainstem in three-dimensional magnetic resonance images. Using the partial differential equations based shape bottlenecks algorithm cooperating with an information potential value clustering process, the method detects and cuts, first, the compartmental connections between the cerebrum, the cerebellum and the brainstem in the white matter domain, and then, the interhemispheric connections of the extracted cerebrum and cerebellum volumes. The modeling of partial volume effect is used to locate cerebrum, cerebellum and brainstem boundaries, and make the interhemispheric connections detectable. With the knowledge of the subject orientation in the scanner, the Adaptive Disconnection method can automatically adapt the variations in subject location and normal brain morphology in different images without the aid of stereotaxic registration. The method was evaluated with one simulated realistic database and three clinical databases. The evaluation results showed that the developed method is very accurate and can well tolerate the image noises and intensity non-uniformity. The Adaptive Disconnection method was applied to analyses of cerebral structural asymmetries in schizophrenia. The obtained results were consistent with previously reported observations and hypotheses of abnormal brain asymmetry in schizophrenia.

Furthermore, an automatic shape analysis method was developed based on the Adaptive Disconnection method for studying the Yakovlevian torque in three-dimensional brain magnetic resonance images by numerically modeling the interhemispheric fissure shape with polynomial surface and measuring its regional averaged and local curvature features. This shape analysis method can produce straightforward quantification and geometric interpretation of local and regional Yakovlevian torque.