Effects of Intracellular and Partitioning Asymmetries in Escherichia coli 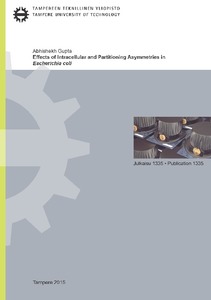 Cell divisions in Escherichia coli are, in general, morphologically symmetric. However, in a few cases, significant asymmetries between sister cells exist. These asymmetries between sister cells result in functional differences between them. For example, cells inheriting the older pole, over generations, accumulate more unwanted protein aggregates than their sister and, consequently, have a reduced growth rate. The reduced ability of these cells to reproduce shows that even these unicellular organisms are susceptible to the effects of aging. To understand senescence in these organisms, it is critical to investigate the sources as well as the functional consequences of asymmetries in division.

In this thesis, we characterize mechanisms responsible for functional and morphological asymmetries in division in E. coli cells, using live, single-cell, single-molecule imaging techniques and detailed stochastic models. First, to understand the functional asymmetries due to the heterogeneous spatial distribution of large, inert protein complexes, we study the kinetics of segregation and retention of such complexes by observing these events, one event at a time. For that, we track individual MS2-GFP tagged RNA complexes, as they move in the cell cytoplasm, and characterize the mechanisms responsible for their long-term spatial distribution and resulting partitioning. Next, to understand the morphological asymmetries, we study the difference in cell sizes between sister cells at division under different environmental conditions. Finally, we present the models and simulators developed to characterize and mimic these processes, as well as to explore their functional consequences.

Our results suggest that functional and morphological asymmetries in division, in the growth conditions studied, appear to be mostly driven by the nucleoid. In particular, we find that the fluorescent complexes are retained at the poles due to nucleoid occlusion. Further, the positioning of the point of division is also regulated by the degree of proximity between the two replicated nucleoids in the cell at the moment preceding division. Finally, based on simulation results of the models in extreme conditions, we suggest that asymmetries in these processes in division can enhance the mean vitality of E. coli cell populations. Overall, the results suggest that nucleoid occlusion contributes, in different ways, to heterogeneities in E. coli cells that ultimately generate phenotypic differences between sister cells.