Development of Vehicle Parapets with Safe Impact Performance for Bridges 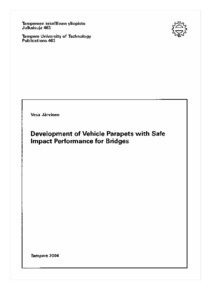 The European Committee for Standardization published in 1998 the first two parts of Standard EN 1317 under the general title: Road restraint system. The published parts specified the requirements and methods for full-scale impact tests on safety barriers. Within the same year the European standard was given the status of a Finnish national standard.


If public funding is involved, the safety barrier to be used in new building must conform to the requirements of the European standard. The safety barrier generally used in Finland on bridges, the standard vehicle parapet of the Finnish Road Administration, did not conform to the standard according to the arranged full-scale impact tests. Thus began the development process described in this thesis.


The unit of analysis of this thesis is the development method of new Finnish standard vehicle parapets. The aim of the study was to prove that the vehicle parapets conform to the impact test acceptance criteria of Standard EN 1317, can be developed at a reasonable cost by using an analysis method, which was a combination of calculation analyses, full-scale impact tests and experience received from the process. The goal was to improve road safety by developing impact-safer vehicle parapets.


The new Finnish standard safety barriers to be used on bridges, Finnra H1 and H2 vehicle parapets, were successfully developed with the chosen method so that they conform adequately to Standard EN 1317. Suitable further development of the used analysis method was thought to be the implementation of more reality-accurate finite element systems. It was also defined as one of the main development area of the standard.


The costs of increasing the safety of vehicle parapets in Finland will be about equal to what is saved in accident costs. The number of injuries will decrease and the high risk of severe consequences in public transport vehicle accidents will fall without any notable additional cost.


The Vehicle parapets publication of the Finnish Road Administration is going to be released later as a result of the development process. It will consist of a design manual and the quality requirements for the vehicle parapets to be used in Finland as well as the drawings of the new Finnish standard vehicle parapets.