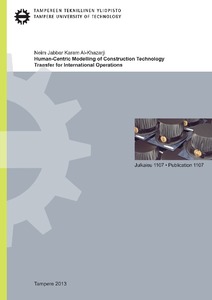 Technology transfer is the process of transferring knowledge and technology from one country to another. There are two basic approaches for implementing technology transfer; the horizontal approach and the vertical approach. The horizontal approach aims at transferring technology applications between developed countries where the relevant concepts already exist in the transferee country. The vertical approach aims at transferring technology accompanied by necessary knowledge from the transferor to the transferee. The vertical approach is optimal for technology transfer between developed and developing countries. Several models have been introduced to present appropriate methods for implementing vertical technology transfer between developed and developing countries. These models have given essential platforms for this purpose with rich structures and assumptions. However, these models have been criticised since they were not able to resolve significant obstacles such as the linguistic, cultural, political, and economic factors that are usually associated with technology transfer between developed and developing countries.
This research proposes a new model for implementing vertical technology transfer between developed and developing countries that takes into account several potentially influential human-centric factors. The two main characteristics of the proposed model are the inclusion of human-centric factors represented by professional immigrants in the developed countries (diasporas) and the benefit of dual knowledge streaming through the technology transfer process. Certain types of diasporas who possess professional skills are qualified to act as Knowledge and Technology Integrators due to their bilingual, bicultural and technology expertise (BBTs). The proposed model will be called the Dual Technology Transfer (DTT) model. The DTT model has been designed based on theoretical grounds (literature review) and empirical grounds (case studies). The literature review focuses on previously developed technology transfer models. Two different case study approaches were chosen for this research to ensure optimal results for the study by obtaining two separate streams of data. The first case study approach, which is known as a single case study (SC), is based on gathering qualitative data from one construction project and analysing its data using inductive analysis. The second case study approach, which is known as a multi-case study (MC), is based on gathering quantitative data from multiple construction projects and analysing this data using statistical analysis.