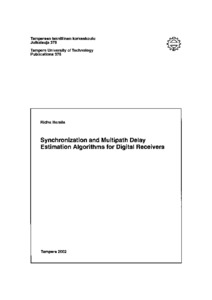 This thesis considers the development of synchronization and signal processing techniques for digital communication receivers, which is greatly influenced by the digital revolution of electronic systems. Eventhough synchronization concepts are well studied and established in the literature, there is always a need for new algorithms depending on new system requirements and new trends in receiver architecture design. The new trend of using digital receivers where the sampling of the baseband signal is performed by a free running oscillator reduces the analog components by performing most of the functions digitally, which increases the flexibility, configurability, and integrability of the receiver. Also, this new design approach contributes greatly to the software radio (SWR) concept which is the natural progression of digital radio receivers towards multimode, multistandard terminals where the radio functionalities are defined by software.


The first part of this research work introduces a new technique for jointly estimating the symbol timing and carrier phase of digital receivers with non-synchronized sampling clock for both data-aided and non-data-aided systems using a block-based feed-forward architecture. This technique is a practical, rapidly converging, fully digitally implemented synchronization concept based on a low-order polynomial approximation of the likelihood functions using the Farrow-based interpolator. A review of maximum likelihood theory, which is the basis for coherent theory of synchronization, defines first the criteria and general framework for developing near-optimum synchronization schemes for digital communication systems. Then, efficient Farrow-based polynomial approximations of the typical likelihood functions are derived for systematic symbol timing, carrier phase and fine acquisition frequency synchronization algorithms.


Another important receiver functionality closely related to synchronization is propagation delay estimation which is the basis of positioning technologies. Mobile phone positioning is becoming unavoidable after the mandate imposed by communications regulatory bodies on emergency call positioning. The second part of this thesis reviews and develops new techniques with subchip resolution capabilities for estimating closely-spaced multipath delays in spread-spectrum CDMA systems. Generally, multipath delays caused by distant reflectors have relatively large delay spread, with more than one chip interval between different paths, that can be resolved using conventional delay-locked-loop techniques. However, shorter excess path delays result in overlapped fading multipath components that introduce significant errors to the line-of-sight path delay and gain estimation. Overlapping fading multipath components are considered as one of the major sources of error that have strong impact on high precision mobile positioning solutions, as well as, on mobile applications of dedicated systems like the Global Positioning System (GPS). An overview of the most promising geolocation positioning techniques for wireless systems that are being standardized is first provided with a survey of fundamental concepts and major problems in positioning. Then, the characteristics of different channel models and conventional multipath delay estimation techniques based on maximum likelihood theory are also discussed. Two new techniques with subchip resolution capabilities are proposed for estimating closely-spaced overlapped multipath components. These techniques are intended to improve the accuracy of location estimates by estimating correctly the delay of the line-of-sight path.