Generation and Interaction of Dissipative Solitons in Fiber Lasers 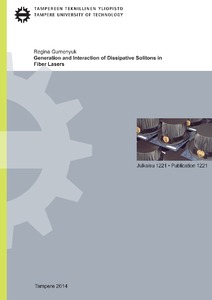 The energy transition in bismuth-doped alumosilicate- and phosphosilicate-core fibers was examined using the spectroscopy of transient oscillations at room and liquid-nitrogen temperatures. Bi-doped alumosilicate fiber provides luminescence at the 1.18 μm wavelength band, while Bi-doped phosphosilicate fiber emits at 1.32 μm. The study revealed three-level transition at room temperature and a four-level system at liquid-nitrogen temperature at the 1.18 μm wavelength range. The long-wavelength range, 1.32 μm, operates via four-level transition scheme at room temperature.

A detailed analysis of pulse dynamics in the mode-locked fiber laser was performed. Under thorough control of the laser parameters, the different soliton groups were obtained: bound solitons, bunch of solitons, soliton rains. Parameters affecting soliton interaction include the recovery dynamics of the saturable absorber, the recovery dynamics of the gain medium, net cavity dispersion, nonlinearity, the sign of gain medium dispersion.