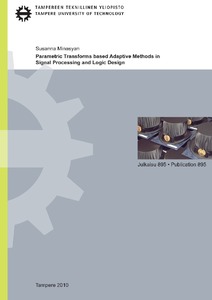 The thesis is devoted to adaptive parametric transforms based methods in digital signal processing and logic design. It is organized as an introduction to the topic followed by six original publications presenting the main scientific results.
The introductory part begins with an overview of unified approaches to fast Discrete Or-thogonal Transforms (DOTs) such as the well-known Fast Fourier Transform (FFT), Fast Haar Transform (FHT), and Fast Reed-Muller Transform (FRMT). Then, a new unified approach is presented based on introduction of new families of parametric transforms with fast algorithms having a unified structure. This proposed parametric transforms allow not only to generalize many well-known fast DOTs but also to synthesize an infinite number of new ones that can be adapted to given application and given input signal by selecting or defining a proper set of parameters. In particular, one of the proposed fast parametric transforms is the Parametric Haar-like Transform (PHT), which was studied in applications to important practical areas, such as image compression and signal/image denoising. Other examples are parametric fast logic transforms such as the Binary Reed-Muller Haar-like (BRMH), Hybrid Reed-Muller Haar (HybRMH), Ternary Haar-like Transforms (THT), which were successfully studied in applications to logic design.
The introductory part of the thesis continues with a short discussion on image compres-sion techniques. Afterwords, our research aiming to reveal the potential of the proposed class of Haar-like parametric transforms in improving the performance of fixed block transforms in image compression is presented. This has resulted in two new algorithms. The nature of the proposed schemes is such that their performance is at least as good as that of conventional Discrete Cosine Transform (DCT) based schemes.
Thereafter, the application of parametric transforms in signal/image denoising is pre-sented. After a short overview of transform based image denoising methods, two new PHT based algorithms are described. In these algorithms, post-processing steps using PHT are ap-plied in combination with the well-known wavelet thresholding based denoising. The perfor-mance of the proposed methods shown a significant improvement in noise reduction com-pared to the wavelet based techniques.
Finally, the application of parametric transforms in digital logic design is explored. Many problems in analysis, synthesis, testing of digital devices have simpler solutions in spectral than in original domain. Examples of classical spectral transforms widely used in digital logic design and communications are Walsh, Haar, Reed-Muller, arithmetic transforms that gained popularity due to their simple and efficient in terms of space and time fast implementations important for practical applications. In the thesis new binary, ternary as well as hybrid parametric transforms combining some known transforms were introduced. The proposed spectral transforms are signal adaptive in the sense that they are designed as a result of analysis of the signal to be processed. New spectral methods utilizing these transforms were developed in order to improve their performance in compact representation of binary and ter-nary logic functions. The proposed methods were analyzed experimentally showing good re-sults compared to classical transforms. The proposed transforms are of interest in logic design due to their flexible features such as signal adaptivity, fast implementation and low-complexity.