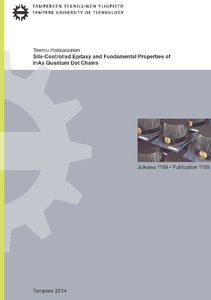 Self-assembled InAs/GaAs quantum dots (QD) are artificial atoms which exhibit extremely high optical and structural quality and enable tailoring of the quantum confinement by adjusting their size, shape, and chemical composition. However, a disadvantage of the self-assembled formation process is that the QDs are randomly located on the GaAs surface. The ability to determine the positions of the QDs at the moment of nucleation, i.e. site-controlled growth, is essential for the new generation of photonic applications including single- and entangled-photon sources and nanophotonic integrated circuits. The purpose of this thesis is to introduce a new nanomaterial system composed of site-controlled InAs quantum dot chains (QDC) grown by molecular beam epitaxy in nanoimprint lithography prepared grooves. A thorough investigation of the structural and optical properties of QDCs is also presented.

The thesis demonstrates that, regardless of the inherent anisotropy of the GaAs(100) surface, QDCs having similar density, size, and emission energy can be grown simultaneously on nanopatterns with different orientations by carefully selecting the growth parameters. However, the in-plane optical polarization of the spontaneous emission from the QDCs depends on their orientation. In more general perspective, this thesis reveals that the nanopattern on which the site-controlled QDs are grown has a strong influence on their morphological properties, including shape, size, strain profile, and composition profile. These properties are strongly cross-correlated and they all influence the electronic and optical characteristics of the QDs. For example, the growth of QDs in the grooves increases their oscillator strength for the vertically polarized spontaneous emission, which is the polarization component that can be coupled to surface plasmons in a metal film. This polarization property accompanied by the possibility of deterministic lateral positioning makes the site-controlled QDCs potential building blocks for plasmonic and nanophotonic waveguides.