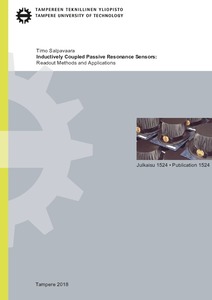 This work concerns the development and implementation of a measurement system based on inductively coupled passive resonance sensors. A custom-made readout device to improve the feasibility of the readout in applications where continuous field measurements are performed was both specified and produced. The readout device was implemented using a simplified version of the method used in conventional impedance analyzers. In addition, signal processing methods were developed which can extract resonance characteristics from the measured data. A special algorithm was developed to compensate for the effects of the changes in the inductive coupling when the measurement distance varies. The operation of the developed readout methods was studied using simulations, and several realistic measurement configurations were tested. Competing readout methods published in the literature were also simulated. The accuracy of all the studied methods depended on the configuration of the measurement system. The inductive coupling coefficient also had a significant influence on the accuracy of the tested methods.

The newly-developed readout methods and the inductively coupled passive resonance sensor were then utilized in a medical application to monitor the pressure between the skin and compression garments. These garments are used, for example, to improve the healing of burns and reduce swelling in the legs. Effective medical treatment of such conditions requires that the appropriate pressure is applied. With this system, the pressure reading under the compression garment can be obtained by using simple disposable sensors that can be read wirelessly through a thin fabric. Using our inductive coupling compensation method, the sensor enabled the monitoring of the pressure with the required level of precision.

Inductively coupled resonance sensors can also be used to monitor the properties of the materials around the sensor. This monitoring is possible because the permittivity of the environment near to the sensor affects the sensor’s resonance characteristics. This method was tested in two applications. In the first application, the manufacturing process of ceramic slurry was monitored by a sensor that was installed inside the container where the slurry was mixed. The resonance characteristics of the sensor were measured as the manufacturing process was incrementally carried out. The results indicated that the method could be used to control the composition of the slurry. In the second application, the inductively coupled sensors were tested in monitoring the degradation processes of two different polymers during hydrolysis. In this application, the sensors were encapsulated into the tested polymers. The polymer samples were kept inside containers filled with buffer solution and the resonance characteristics of the encapsulated sensors were then measured wirelessly from outside. The results showed a clear difference in degradation profiles between the tested polymers. The method may provide a novel way to continuously monitor the degradation processes of certain materials.