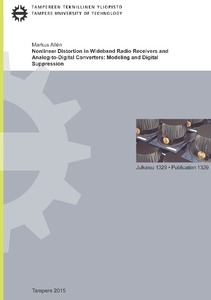 Emerging wireless communications systems aim to flexible and efficient usage of radio spectrum in order to increase data rates. The ultimate goal in this field is a cognitive radio. It employs spectrum sensing in order to locate spatially and temporally vacant spectrum chunks that can be used for communications. In order to achieve that, flexible and reconfigurable transceivers are needed. A software-defined radio can provide these features by having a highly-integrated wideband transceiver with minimum analog components and mostly relying on digital signal processing. This is also desired from size, cost, and power consumption point of view. However, several challenges arise, from which dynamic range is one of the most important. This is especially true on receiver side where several signals can be received simultaneously through a single receiver chain. In extreme cases the weakest signal can be almost 100 dB weaker than the strongest one. Due to the limited dynamic range of the receiver, the strongest signals may cause nonlinear distortion which deteriorates spectrum sensing capabilities and also reception of the weakest signals. The nonlinearities are stemming from the analog receiver components and also from analog-to-digital converters (ADCs). This is a performance bottleneck in many wideband communications and also radar receivers. The dynamic range challenges are already encountered in current devices, such as in wideband multi-operator receiver scenarios in mobile networks, and the challenges will have even more essential role in the future.

This thesis focuses on aforementioned receiver scenarios and contributes to modeling and digital suppression of nonlinear distortion. A behavioral model for direct-conversion receiver nonlinearities is derived and it jointly takes into account RF, mixer, and baseband nonlinearities together with I/Q imbalance. The model is then exploited in suppression of receiver nonlinearities. The considered method is based on adaptive digital post-processing and does not require any analog hardware modification. It is able to extract all the necessary information directly from the received waveform in order to suppress the nonlinear distortion caused by the strongest blocker signals inside the reception band.

In addition, the nonlinearities of ADCs are considered. Even if the dynamic range of the analog receiver components is not limiting the performance, ADCs may cause considerable amount of nonlinear distortion. It can originate, e.g., from undeliberate variations of quantization levels. Furthermore, the received waveform may exceed the nominal voltage range of the ADC due to signal power variations. This causes unintentional signal clipping which creates severe nonlinear distortion. In this thesis, a Fourier series based model is derived for the signal clipping caused by ADCs. Furthermore, four different methods are considered for suppressing ADC nonlinearities, especially unintentional signal clipping. The methods exploit polynomial modeling, interpolation, or symbol decisions for suppressing the distortion. The common factor is that all the methods are based on digital post-processing and are able to continuously adapt to variations in the received waveform and in the receiver itself. This is a very important aspect in wideband receivers, especially in cognitive radios, when the flexibility and state-of-the-art performance is required.