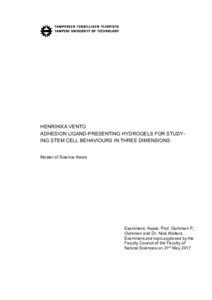 In their natural microenvironment, stem cells are surrounded by various mechanical and biochemical signals, and growing evidence suggests that, similarly to the biochemical cues, the biophysical properties of the microenvironment play an important role in guiding cell behaviours. However, the complex mechanisms by which different properties affect cell function, individually or in combination with other cues, is not fully understood. Hydrogels have emerged as useful biomaterials for studying cell behaviours in three dimensions (3D), as they can be precisely modified with e.g. cell adhesion ligands or enzymatically degradable sequences, in order to study a cell’s interactions with its surroundings.
Research has shown that not only the density, but also the inter-ligand distance is implicated in directing stem cell fate via mechanotransductive processes. The original objective of this thesis was to contribute to the fabrication of adhesion ligand-presenting poly(ethylene glycol) (PEG)–peptide hydrogels, and to carry out preliminary studies on the effects of different adhesion ligand concentrations on cell behaviour. Due to setbacks in the hydrogel fabrication, the main focus was shifted from PEG hydrogels to hyaluronan hydrogels, to which fibronectin was added as an adhesion ligand. In addition, RNA extraction from PEG hydrogels was optimised, as the 3D environment presents additional challenges for extraction of high quality messenger RNA, which is needed in cell differentiation studies.
Human bone marrow stromal cells were encapsulated in adhesive, fibronectin-containing hyaluronan hydrogels, and their response was compared to cells encapsulated in non-adhesive hyaluronan hydrogels. Cells were cultured in the gels for seven days, and cell viability, proliferation and morphology were compared at three different time points. For the RNA extraction experiments, two commercially available RNA extraction kits were compared and two different cell lysis buffers were used.
Adhesion ligand presentation clearly improved cell survival in hyaluronan gels, as expected. Cells spread and remained more viable during the week of culture time. Cells were not able to spread and their viability was low in the gels without adhesion sites, and the permeation properties of these gels need to be investigated in more detail, as they caused issues with several assays. The highest RNA yield was achieved with the RNeasy Plus Mini Kit and its original RLT+ buffer. These results can be later used in further cell differentiation studies with PEG hydrogels.