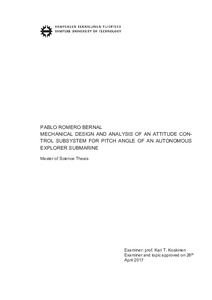 This thesis´s aim is the design of an attitude control subsystem of an autonomous explorer submarine. This submarine has three attitude subsystems; thruster system for propulsion, ballast system for heave motion and the object of this thesis, the pendulum system for the pitch angle.
The pitch angle control is managed by varying the position of the center of gravity of the submarine relatively from the buoyancy point. To do that, the system moves the batteries of the submarine.
At the beginning of this thesis there were already some researches done about the batteries configuration and the motion system. A planetary gearbox outside the motion area of the pendulum and a stepper motor were considered to rotate the batteries and the oil container as a whole.
After considering different layouts and their interactions with the other devices inside the submarine, the planetary gearbox and the movement of the oil container have been discarded. A stepper motor, located besides the batteries and rotating with them, moves the mechanism through a gearbox based on a worm-spur gear scheme. This gearbox provides a reduction of 180:1 and self-locking behavior, which means that no energy is needed to keeping a reached pendulum position. Due to the efficiently space use, it has been possible to increase the size of the batteries to add weight to the pendulum and increase the capacity, instead of 16.000 mAh now the capacity of each battery is 20.000 mAh.
The pendulum system is able to rotate 90° in 6.35 seconds and done simulations show that for a 20° target rotation the submarine will reach a stable equilibrium position in less than 30 seconds.