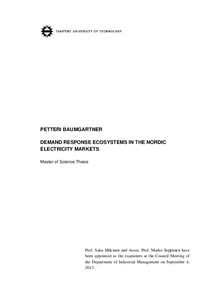 The research comprises a rigorous investigation into the nature of electricity markets in the Nordic countries and conceptualization of business ecosystems. Thus, a narrative review of the majority of relevant papers known to the author was conducted. The literature review is supplemented with additional empirical enquiry into the perceptions of experts to deepen the understanding and knowledge of the issues on deregulated electricity markets. The focus is on the value creation procedure that changes with demand response, rendering the roles of the actors and interlinks between them—i.e., rendering the ecosystem structure. Quintessential is the maturation of the ecosystem; what kind of ecosystem would be attractive to every actor.

The results indicate that the business ecosystem level approach opens new avenues to understand and address the issues impeding demand response emergence on the deregulated electricity markets. Essential is to identify the end customer of the value proposition in this particular ecosystem, not forgetting the intermediaries and complementors. Regulatory restrictions should thoroughly be taken into account, too, when they govern the market. The main findings implicate that the consumer cannot be considered as the end customer of demand response services. Such services are probably more beneficial to the suppliers or distribution system operators than to consumers. Additionally, companies ought to delay launching their offers until regulation and regulators are account for the role of demand response—e.g., whether it should be a part of regulated operations or deregulated. Consequently, the findings generally support the view that the business ecosystem concept can shed light on the debate on demand response.