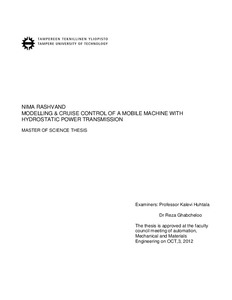 A parallel hydrostatic power transmission is studied and the possible constraint which can effect on the fluid division in the system is analyzed.
The dynamic model of the machine is studied in two sections: a simplified model and a complicated model. In both of the models all the acting forces and their effect on the vehicle’s motion are studied and the dynamic behavior of the machine is calculated using mathematical equations.
The speed of the machine cannot be controlled by a simple feedback control. It is concluded that a simple feedback controller does not provide the best performance for this application. The gain-scheduled PID controller is used for this application. This Type of controller can adapt itself with the variable dynamic characteristics of the hydraulic system.
Gain scheduling is the major key in gain-scheduled PID controller. The results of tuning with different gains are shown and the Bode & step diagrams are presented.
Several static tests on the machine have been done to monitor the behavior of the HST. For the first test the diesel engine rotational speed is kept constant at 1200 RPM and the displacement of hydraulic pump is modified. For the second test the displacement of hydraulic pump is kept constant at 60% and the diesel engine rotational speed RPM is modified. In both of the tests the vehicle is moved in a straight direction and on a smooth terrain.
The result of comparison between the open loop & closed loop control response is presented. The behavior of the open loop & closed loop controllers is studied in the presence and absence of an external disturbance. The external disturbance is considered to be a gradient terrain.
In the last section, the conclusion of the thesis is presented. Some useful hints are recommended to overcome the difficulties that the cruise control of the machine is faced.