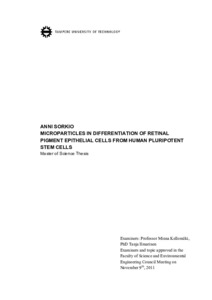 The number of people affected by degenerative diseases of the retina increases notably due to the longer life expectancy. The weakening of the sight concerns especially older people, who suffer from degeneration of the retina and its retinal pigment epithelium (RPE) monolayer. Currently, these degenerative diseases of the retina are incurable. Cell transplantation of healthy RPE cells is considered to be a potential treatment for these diseases. Due to the unlimited self-renewal capacity and pluripotency human pluripotent stem cells (hPSCs) are considered as possible cell sources for transplantation purposes. However, the current differentiation protocols for RPE cells from hPSCs are inefficient and result in low yields.

The aim of this thesis was to study whether biodegradable poly(L-lactide) (PLLA) microparticles and commercial biostable cellulose anion exchange diethylaminoethyl (DE) 53 microparticles could be exploited in increasing the efficacy of differentiation of hPSCs into RPE cells. In addition, the potential of the microparticle culture system for stem cell maintenance in feeder-free conditions was evaluated. The attachment and proliferation of hPSCs on microparticles were analyzed by immunofluorescence analysis and microscopy. The success of differentiation of RPE from stem cells in microparticle cultures was evaluated by inspecting the appearance of pigmentation in cultures as well as by investigating the expression of RPE maturation markers on gene expression levels by RT-PCR.

The PLLA microparticles did not support the attachment and proliferation of hPSCs in feeder-free conditions. The poor performance of PLLA particles in cell culture studies might be due to the hydrophobic nature of the particle surfaces. In contrast, hPSCs attached, proliferated and maintained their pluripotency on DE 53 particles. Furthermore, the hPSCs were successfully differentiated into RPE cells on these DE 53 particles. However, the differentiation efficacy did not outperform the conventional differentiation protocol.

This was the first study in which the hPSCs were successfully differentiated into RPE cells on microparticles. Microparticles are far from being routinely used in hPSC maintenance and differentiation to mature cell types. More long-term and large-scale studies need to be conducted in the future. Nevertheless, at the moment they seem appealing and promising with a possibility to grow stem cells in large-scale and cost effectively. The microparticle culture systems set challenges for the cell analysis due to their 3-dimensional structure and autofluorescence property. Therefore, novel methods for characterization, analysis and imaging of microparticle culture systems should be developed. /Kir12