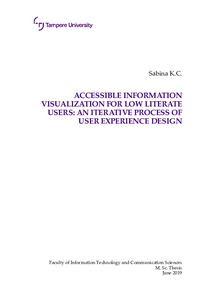 This study focuses on how to build accessible information visualization for low literate (LL) users. It was carried out with technology company, WorkAhead. WorkAhead surveys people through video conversation technology and helps enterprises interact with workers in the supply chain. After the survey, the results are not accessible to LL users. To change this, an effective design that LL users can understand is needed. The primary goal of this study is to visualize the survey results into illustrative graphics that LL users are able to understand. The secondary goal is to focus on the medium of delivery of information.

To meet the goals, three LL users were interviewed in order to find their mental models regarding basic visualization methods. Based on the responses and design guidelines, an initial interactive prototype was built. The initial prototype was further improved and implemented into a final functional one. There were two graph animations embedded in the final prototype: split graph and clock graph. The graph animations were evaluated with the users. Six participants were interviewed and observed while they interact with the final prototype. Most of the participants easily understood split graph animation whereas only one participant understood clock graph.

The results from this study show that an interactive visualization, along with the use of animation, can make data understandable to LL users. This study proves that the responsive behaviour of design and its availability on the web can increase accessibility to LL users. The findings of this study can be utilized as guidelines in research and design for LL users. It also became apparent that further research on accessible visualization methods and techniques needs to be done for LL users in future studies.