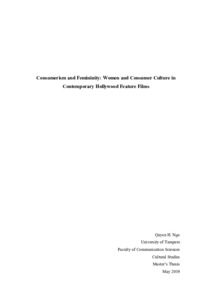 Since its birth in the eighteenth century, consumer culture has been growing and expanding across the world. It is undeniable that consumer culture has been exerting significant impacts on human life in various ways, in which women are noticed to be more vulnerable to its effects and have closer and more complicated relationships with this thriving culture. This thesis aims at examining how contemporary Hollywood cinema depicts the image of women emerging in consumer culture – the connection between women’s values, attitudes and behaviours and the world of consumerism. By analysing these two Hollywood films: Bride Wars (Winick, 2009) and Confessions of a Shopaholic (Hogan, 2009), the researcher focuses on providing the answer to the question: How are women in relation to consumer culture represented in contemporary Hollywood feature films? The research is conducted based on post-structuralist textual analysis. The films under scrutiny are treated as meaningful texts from which fruitful parts are examined to produce answers to the research question. This thesis is expected to bring interesting viewpoints into the studies of films and cultures, and hopefully contribute a humble part to the vast knowledge of the research field.