Managing a systemic change on an operational level in a public organization : A case study of the Swedish Armed Forces 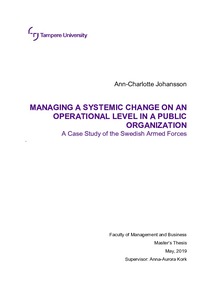 The theoretical framework for this thesis was developed simultaneously as the data analysis process following the methodology of grounded theorizing. The emerged concepts during this process were in line with the theories of systems thinking, systemic change, and change management. Semi-structured theme interviews with three operational managers in the Swedish Armed Forces were conducted. With the ambition to contribute to present knowledge within the management of systemic change on an operational level in the context of a public organization, answers to this thesis research questions were presented by first presenting the idea of this thesis and then comparing and contrasting the findings to previous literature.

The findings reveal that institutional dynamics, type of change, and communication, participation, and resources influence the level of difficulty when managing a change on an operational level in the context of a public organization. The Swedish Armed Forces is a large, bureaucratic, hierarchical, and geographically spread military organization, resulting in a complicated line making decision process and several management layers, which influence the amount of communication to and participation of personnel on an operational level during times of change. The findings also disclose that managing change on an operational level is performed differently but is mainly differentiated based on the attitude of the personnel. That is if the personnel are resistant or supportive of the changes. Another finding is that, regardless the attitude of the personnel, operational managers should always strive to improve and enhance the team’s atmosphere as well as, when necessary, focus on the emotions of those adversely impacted by the change by performing different activities. The final finding is that there is no “one size fits all” approach to manage change as all organizations have a unique community and own, structure, culture, history and needs as well as include different sub-cultures and perspectives. Thus, the argument that the field of management and change include several theories and approaches that are contradictory towards one another where correct recommendations have been largely misinterpreted, misrepresented, and misunderstood, may be argued to be misleading as there is no one single way to lead a change due to several influencing factors that all play a vital role in how a change can and may be managed within an organization.